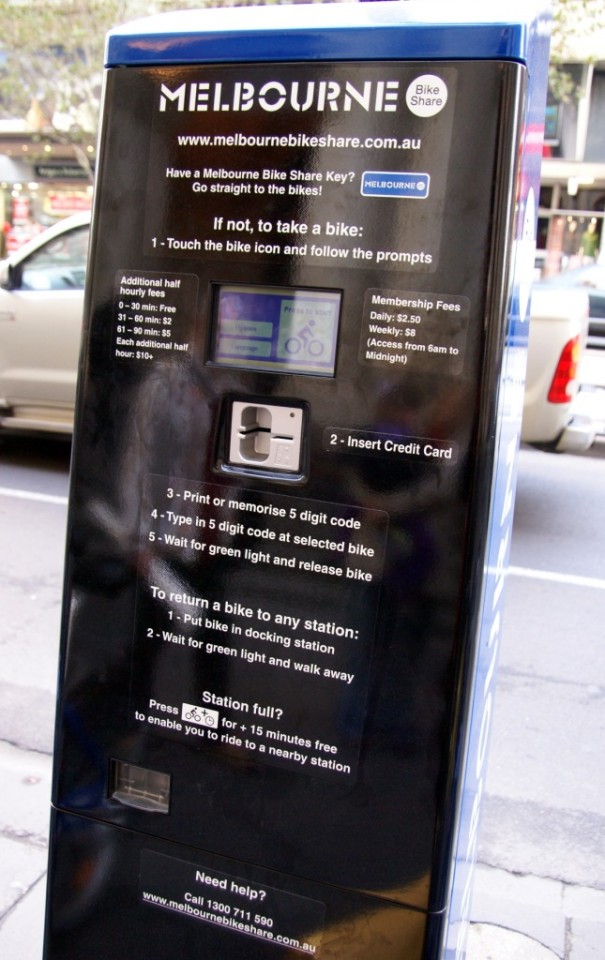 As a city cyclist, I’ve been very interested to see the construction of the new Melbourne Bike Share scheme in the city’s CBD.

Bike share has been a great success in cities as diverse as Montreal, Paris and Barcelona and residents (rather than tourists generally) have been quick to take up the convenience of a public bike system that allows you to zip short distances in the city.

Melbourne Bike Share is operated by RACV on behalf of the Victorian government and its based on Montreal’s BIXI system (the bikes were also manufactured in Montreal by Devinci). In front of many curious onlookers, I borrowed out a bike from in front of GPO, near the corner of Elizabeth St and Bourke St, to give the system a trial run.

The new bikes look very handsome lined up in a sparkling blue row and are branded heavily with Melbourne Bike Share so hopefully that’s enough to deter bike thieves. 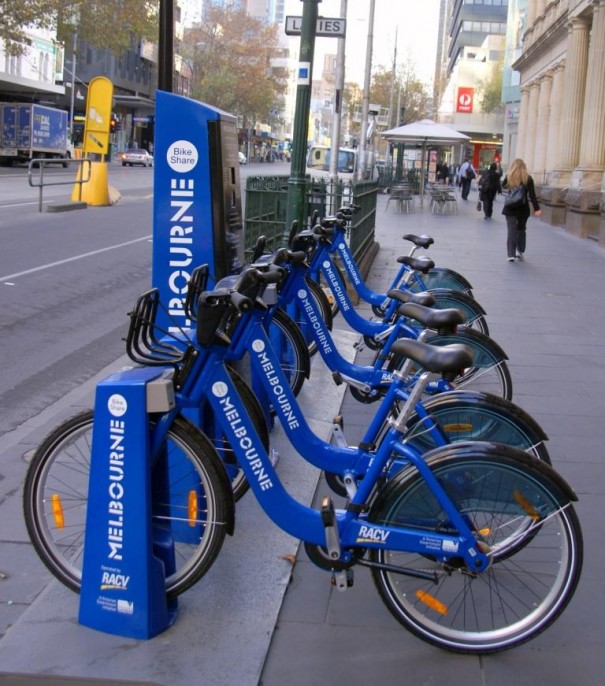 I had no problems using the terminal and inserting my credit card for a day pass ($2.50). The machine spat out a ticket with a 5 digit code consisting only of the digits 1, 2 and 3, which makes it easy to type the code into the console.* 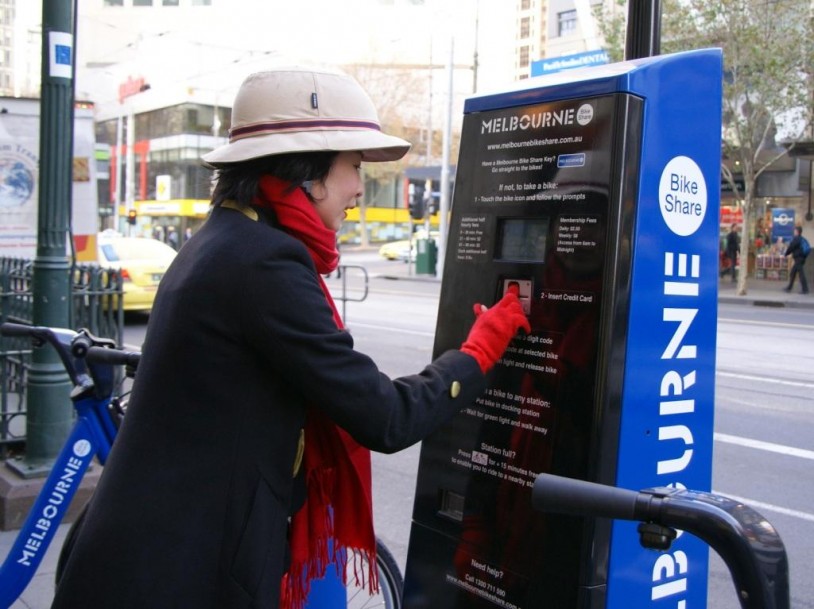 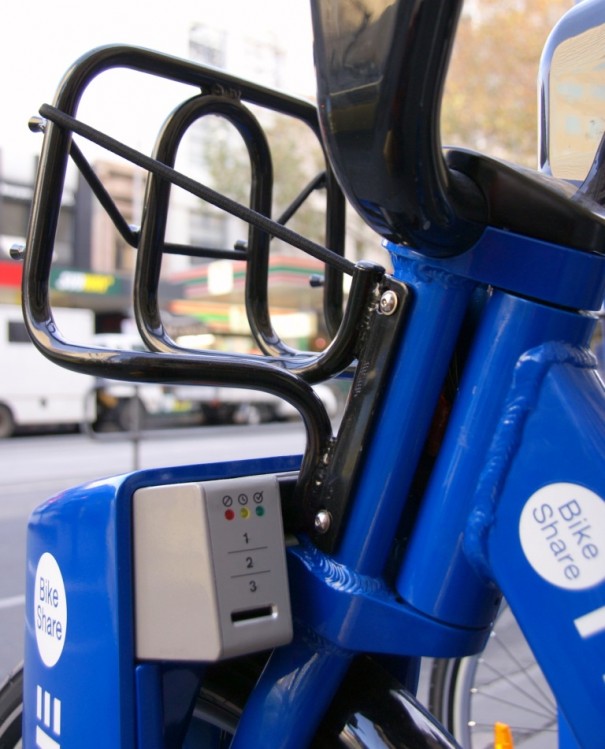 The light flashed green but I had to have a few goes yanking the bike out of the dock before it would release. That could just be a personal foible though.

The bikes are sturdy, step-through bikes with good commuting features:

A chain guard so your pants don’t get grease on them. 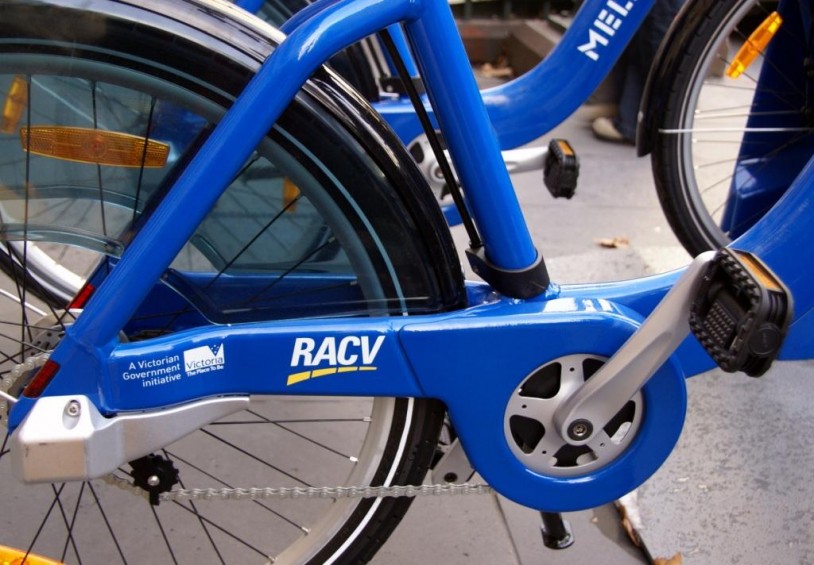 A plastic skirt guard for the rear wheel so your clothes don’t get caught between the back wheel and the brakes. Front and rear mud guards protect you from road dirt and big fat tyres help you balance. 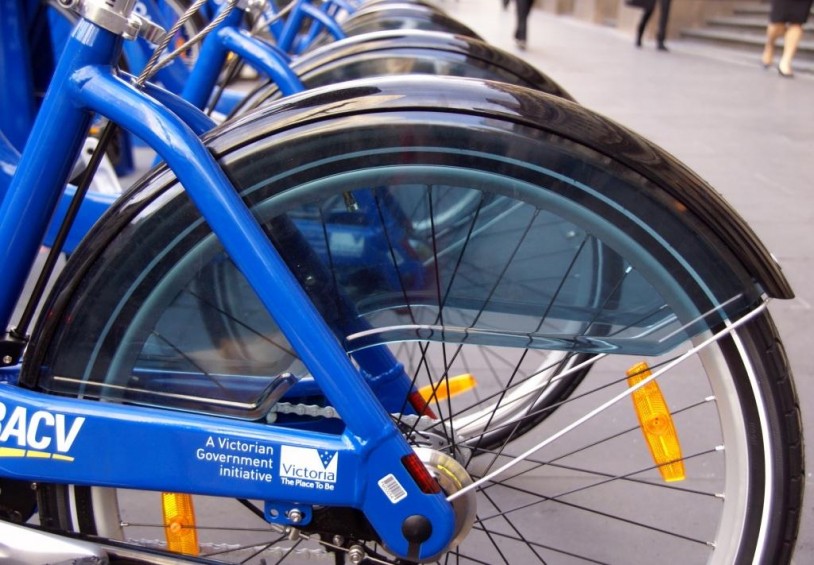 A front rack with an elastic strap allows you to put your handbag onto it, but not too much else. I personally would prefer a basket instead of an open rack so you can carry small, loose and unstructured luggage (like a shopping bag of bread, milk and the newspaper) but as you can see my Lemon Straw Deluxe Shopper, which normally sits on my back rack, coincidentally slotted perfectly into the rack. 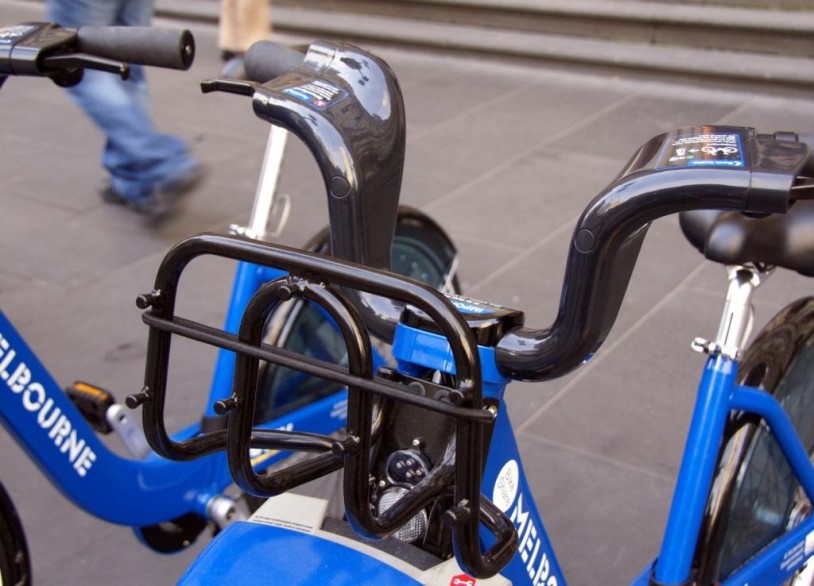 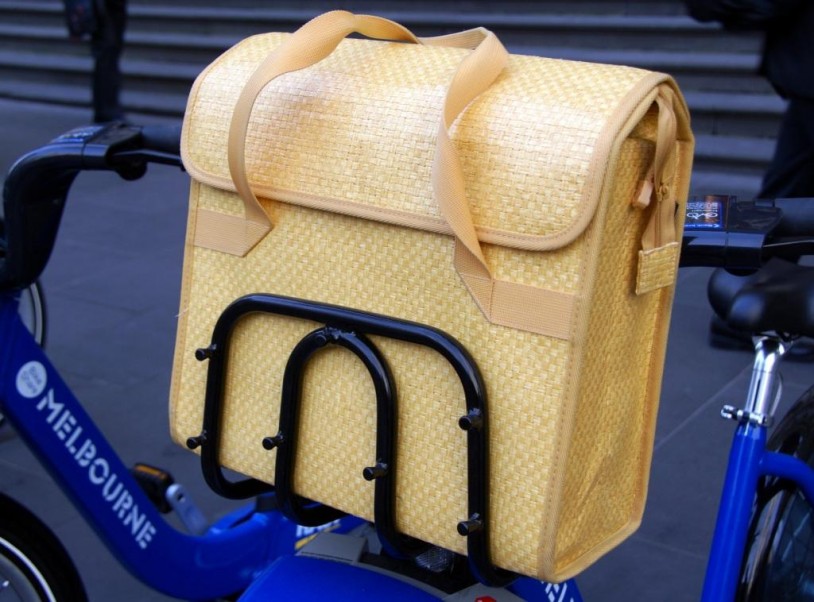 Brakes worked well, gears worked well, ride was smooth and slow. I also liked that you could report a damaged bike simply by returning the bike to a dock and pressing a red button.

For me the negatives of the bike were minor:

Nimble it is not. There are only three gears, which is generally ok for most commuting. However, these bikes are super-heavy and I’m not confident that I’d be able to get up the hill on Collins Street or William Street without a lot of huffing and puffing (and not rolling backwards). I’ve been spoilt with my light 21-gear bike though. 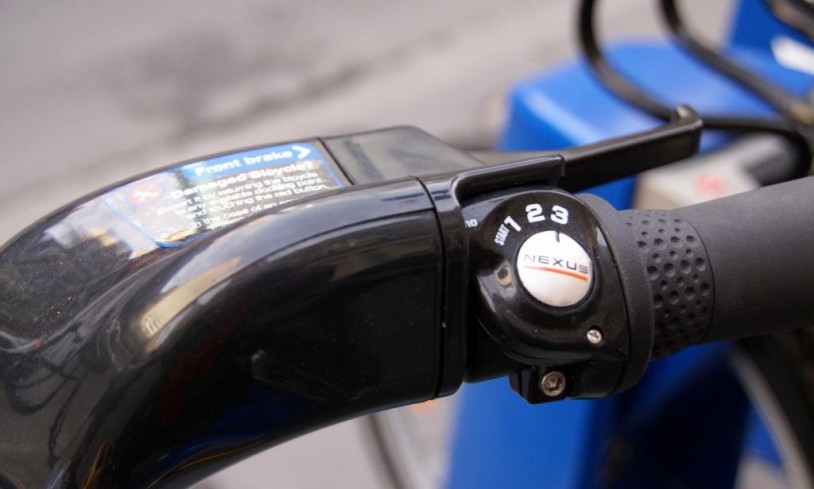 The bell is bizarre, you kind of have to twist beneath of the handlebars to ring it. Not intuitive for a novice cyclist who’s trying to warn people to get out of the way in a panic. 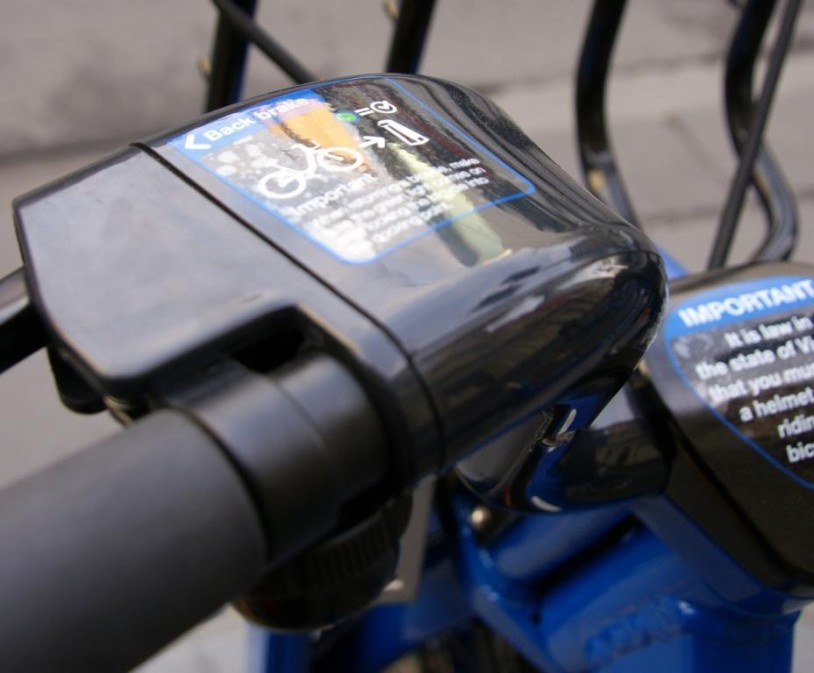 The ajustable seat is hard and not particularly comfortable. However, you’re not expected to spend hours on the bike so I think it’s perfectly ok. 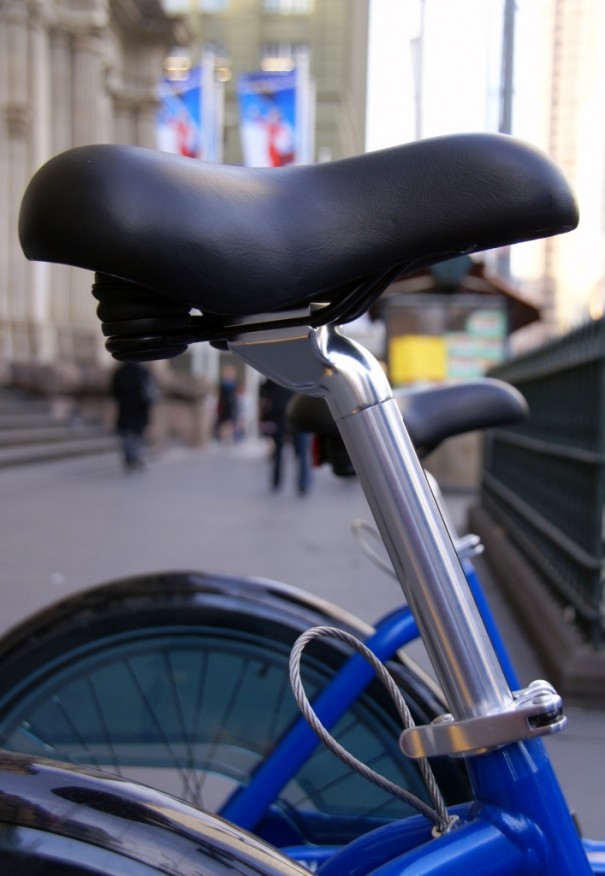 Bike locks are not provided, so you can only lock the bike in a bike dock. That means you’re restricted to a point-to-point trip.

And then the big negative – you have to bring your own helmet. Bringing your own helmet kind of negates the spontaneity of the whole system, doesn’t it?  While I love the idea of a city bike share scheme, I’m not sure how workable it is in practice with mandatory helmet-wearing laws. Melbourne Bike Share doesn’t provide helmets on the spot (annual members have the option to buy a low cost helmet with their subscription) and you’re told to buy a cheap one from a nearby retailer. Unless you’re familiar with bike shops in the CBD, how are you to know where your nearest retailer is? The least they could do is stick a map on the bike dock telling you the locations of the nearest bike shops.

Plus most people who own helmets (and are carrying them around) are very likely to own bikes already – so who exactly is going to using Melbourne Bike Share?

I’m not going to get into a long debate about the pros and cons of compulsory helmet laws. All I’ll say is that I prefer to live in a city that supports bike-sharing than one that doesn’t, as it at least indicates that maybe the government is committed to increasing commuter cycling and to educating the public about the ease and efficiency of using bikes for short trips. Maybe if people use and see people using Melbourne Bike Share, they’ll be encouraged to dig out their old bikes or buy a bike, thereby increasing the number of riders on the road, the impetus to build more cycling infrastructure and cyclist safety generally.

* To rent a bike you need to purchase a subscription online or at a terminal. You receive a 5 digit code or a bike share key, after which time you can take a bike whenever you need, 24/7, and then return the bike within 24 hours at one of the 50 bike stations throughout the city (not necessarily the same one from which you rented the bike). There are corporate memberships but as an individual you can purchase a subscription for a day ($2.50), week ($8) or year ($50). If you keep your trip to under 30 minutes (which is how long it takes me to cycle from the CBD to Fitzroy and back) then that’s all you pay, otherwise additional fees will apply for longer usage. You also need to pay a $300 security deposit for each bike with daily and weekly hire so you need to ensure your credit card has enough credit for the deposit.