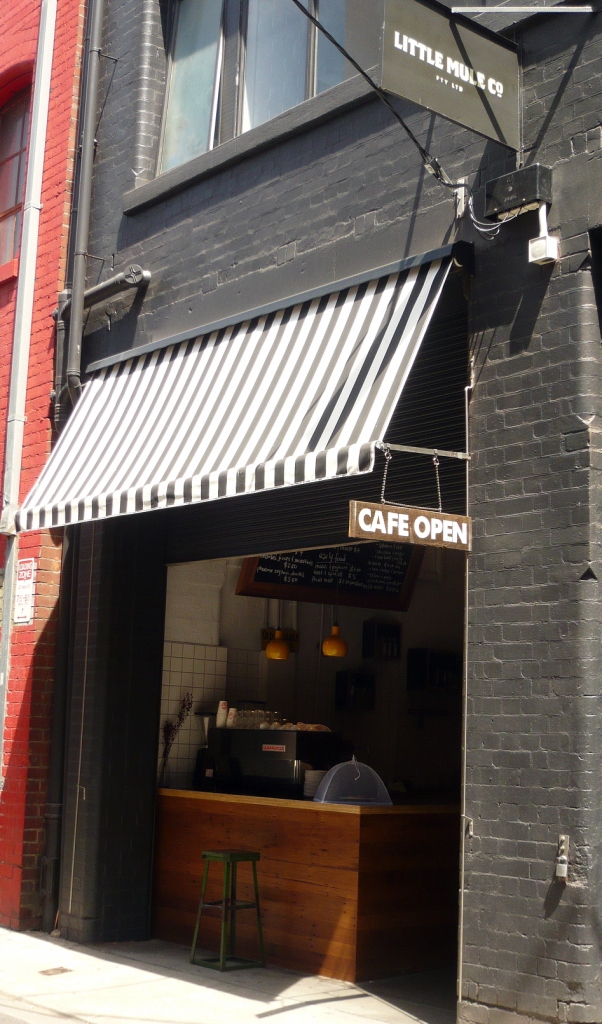 Melbourne’s love affair with coffee and bikes continues with the new kid on the (laneway) block, The Little Mule Company & Cafe.

The Little Mule Company make colourful custom-made fixies in their small workshop and the bikes also provide eye-catching wall hangings for the airy warehouse aesthetic of their small adjoining cafe.

For bike and non-bike lovers, it’s a relaxing place to hang out, away from the bustle of Little Bourke Street and Melbourne Central, with a soundtrack of friendly barista banter and the occasional hiss of the coffee machine. There’s a high wooden communal table where people seem to like to hold casual office meetings, a couple of smaller tables and a cushy couch abutting one exposed brick wall. Water glasses and sugar receptacles are recycled jam jars. Really, it’s got ‘Melbourne laneway hideout’ stamped all over it.

I was lured to The Little Mule Company not just for the bikes, but because they were touting themselves on Facebook as having ‘the best milkshakes in town’. In their old-fashioned milkshakes ($5) they use syrup from Crows Nest Soft Drinks, a Queensland company that’s been making its drinks and syrups since 1903. Sadly, when I was there the one flavour I wanted to try, chocolate malt, wasn’t available – so I took a raincheck for next time.

I settled myself at the communal table and perused their simple lunch menu of toasted melts and sandwiches, baguettes and daily salad/soup (depending on the season), finally deciding on a baguette with smoked salmon, rocket, dill butter and avocado ($8). The menu also has a couple of breakfast options and all-day nibbly things like nuts and olives.

My sandwich came quickly and while simple, it was satisfying and fresh. Chock full of smoked salmon and with lots of crunchy greens stuffed inside. Nicely done.

The cafe also pride themselves in their coffee – sorry I can’t say anything about the coffee as I’m not a coffee-drinker, so if anyone has had the coffee would love to hear your views.

Finally, for the bike enthusiasts and cinephiles out there, The Little Mule Company are hosting Laneway Cinema as their offficial opening event (even though they’re already open). In conjunction with Melbourne Bikefest, they’ll be presenting the Australian premiere of ‘To Live & Ride In LA’  on Thursday November 25th, kicking off from 7:30pm with some pre-show entertainment followed by the movie at dusk. More information here.