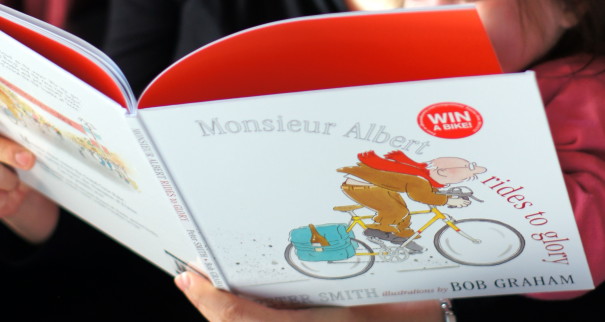 If you’re looking for a fun way to introduce kids to the Le Tour de France then check out Monsieur Albert Rides to Glory.

Monsieur Albert is 60 years old and loves cycling. One day he reads in his morning paper about a cycling race about to start in the centre of Paris and he decides to enter so he can win the prize. He rides the race in his tweed suit, a jaunty red scarf and panniers full of supplies while the other contestants come dressed in lycra on their racing bikes. But…guess who wins the race when they encounter a huge ball of snow up on the col? The publisher recommends Monsieur Albert Rides to Glory for ages 6-8 but younger kids can still appreciate some aspects of the story and the lovely illustrations. You can even use the book to introduce some French vocabulary to them while they are young!