State of Design is Victoria’s annual design festival and the theme for this year’s festival is ‘design that moves’. So it’s fitting that part of the design showcase Design  : Made : Trade is an exhibition of bikes.

Specifically, Treadlie magazine contacted bicycle builders, from professionals to amateurs, and put together an exhibition of eighteen bicycles – from cargo bikes to elegant step-throughs, cruisers to single gears. Each bike comes with a story….

Here are some of our favourites: 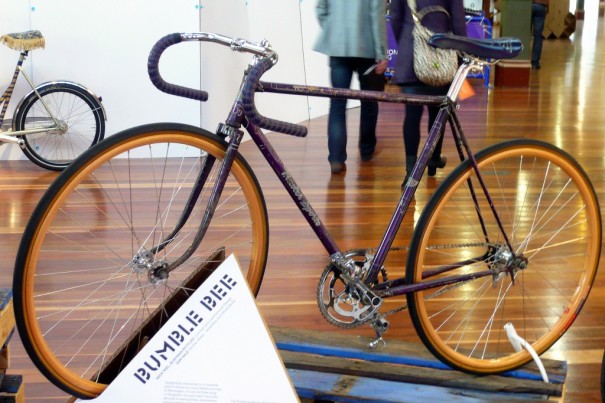 Can you believe that this bike was salvaged from a rusty old frame lying in the gutter? Mick’s eyes were drawn to the fancy key-lined lug work and pinstriping. He then set about repolishing and chrome-plating the handlebars and stem, adding new parts and finishing off the details with a beautiful customised leather seat with a bumblebee motif.

This bike can carry up to 3 kids with easily removable seats to give flexibility in either child or load carrying. Who needs a Toorak Tractor-style SUV for the school run?

Aemilia. Such a pretty name for a pretty bike. By Nigel Venning, Mrs Fairweather – Bike Spotter and Millwright and Connie Kosti – Storyteller and Opinionist. Aemilia was first spotted by Nigel in someone’s shed. He dressed her up with some new colours, some beautiful hand-drawn, laser-cut, wooden-veneer spats, matching timber handles and leather trim.

Dandenong Tea Cart. A gloriously decorated Christiana bike from PS Bikes. A Christianna No Box bike was purchased by RMIT’s Department for Art in Public Spaces. They then commissioned artist Aslam Akram to collaborate on the design and decoration of a traditional Afghan tea bike.

The Tea Cart is to serve as a micro-business for an existing trader making tea in the Afghan Bazaar Cultural Precinct in the Dandenongs. It also aims to promote Afghan culture through social practice and aesthetic impact.