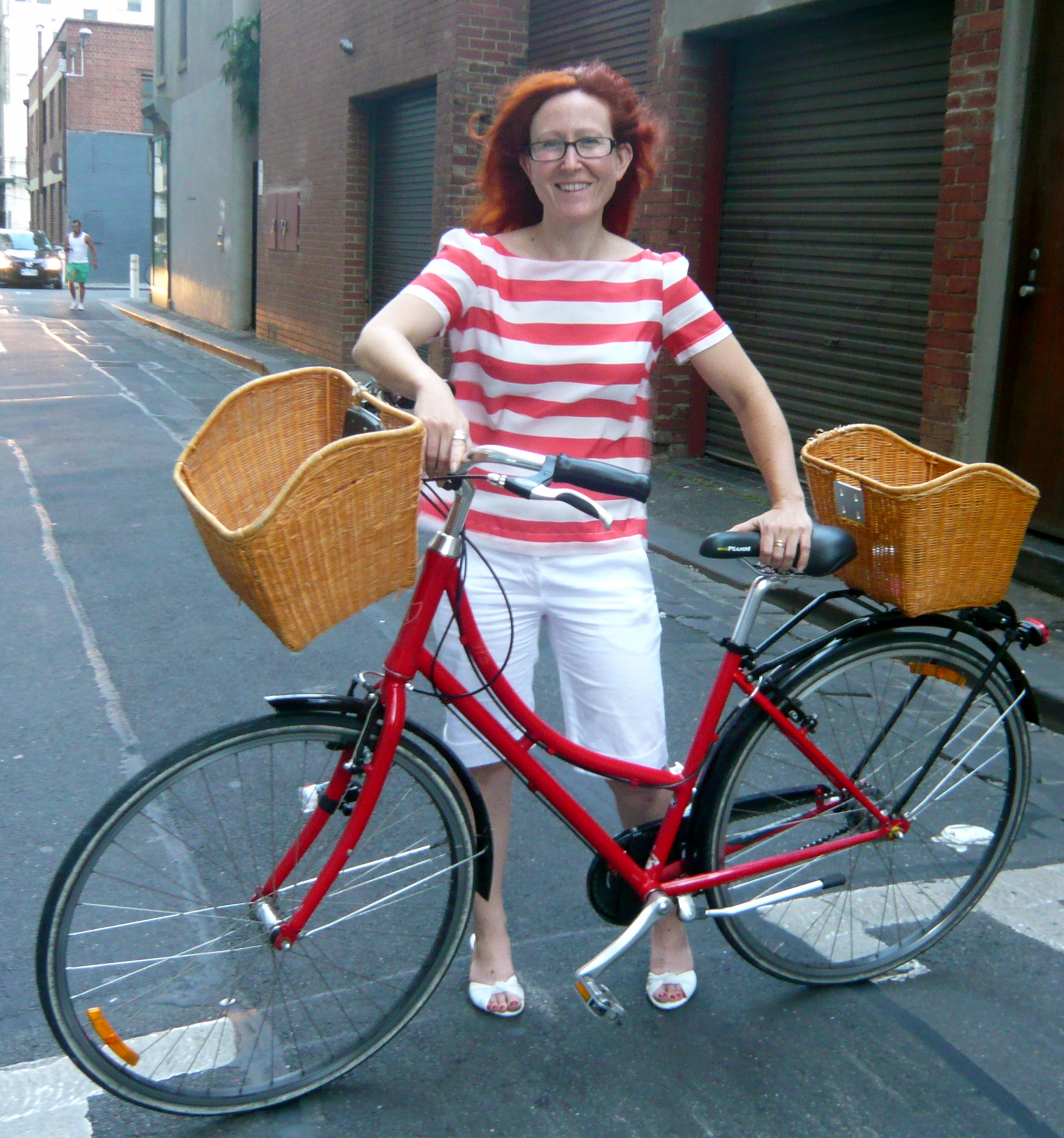 It’s rare for us to offer the blog to guest posts but when we met this flame-haired cyclist proudly showing off her bike named Scarlett we just had to ask.

Because it’s only a year ago that Caitlin discovered her love for cycling and it has transformed her life. Her happiness and joyful freedom is an inspiration to us all, beginners and seasoned riders. Thanks Caitlin! 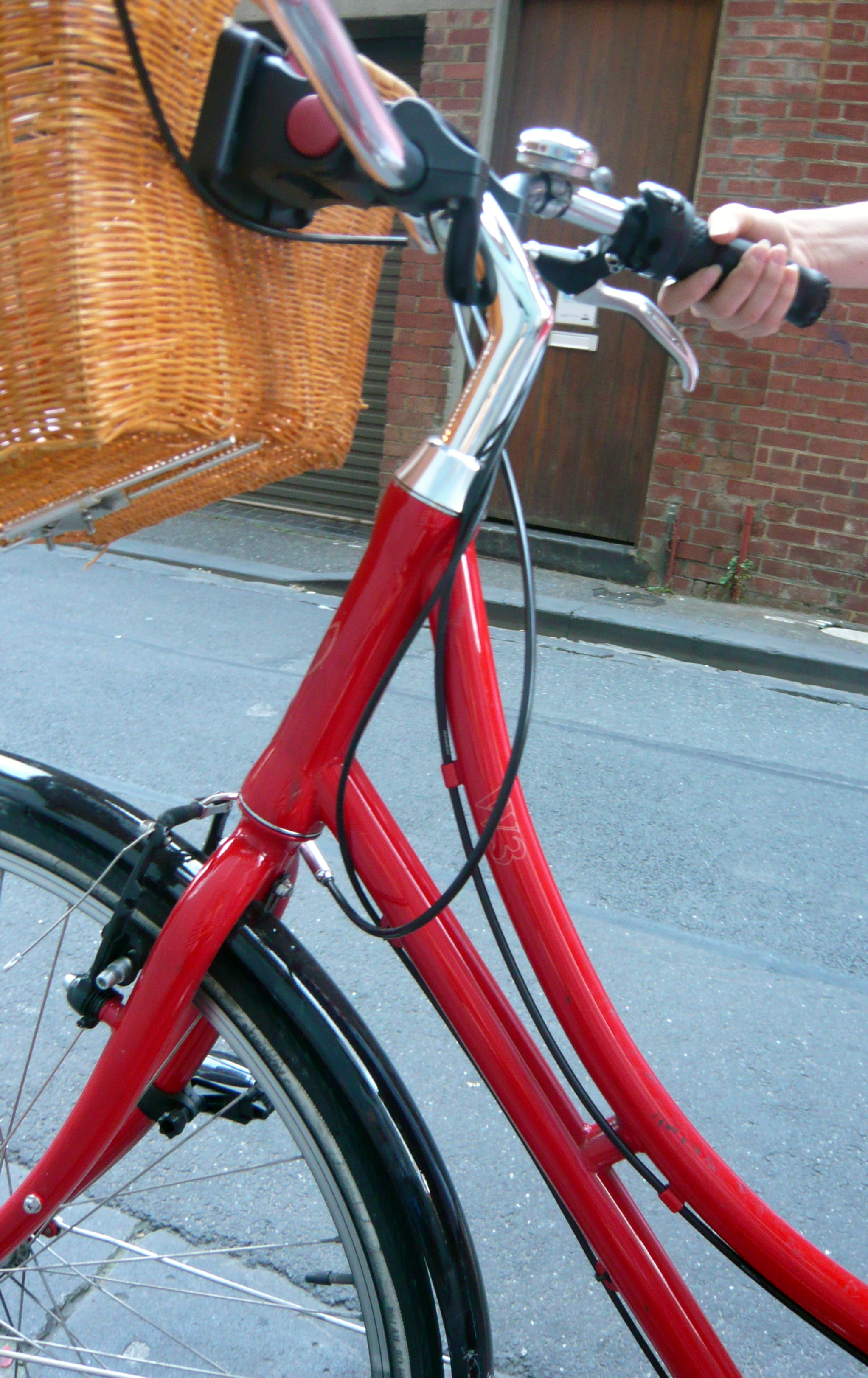 I just thought I’d write to remind you how very lucky you are.

Imagine this: Imagine that everyone in your community, in your workplace, in your group of peers, all of your friends, pretty much everyone you know….including the butcher, the baker, the web-page maker – imagine that they all had the ability to fly….

And for some reason you couldn’t.

Imagine watching them soar effortlessly all the time – to get to work, to the post office, to the bank, to go shopping…..even to come to visit you.

The wind in their hair, the sun on their lips, the feeling of weightlessness as they sail through the air…..

Mind you, it took each of these people a little bravery to be able to fly in the first instance. They fell out of the sky more than once, and grazed their knees on the skid to stop. Some even broke arms and legs in the thud. But they kept getting up and starting again, and every time the exercise became a little easier.

But still you couldn’t do it.

And of course those who did learn learnt early. They started young. And when one is young, bravery comes in spades. And shovels. There is no fear of falling out of the sky if one doesn’t yet know what it feels like to take that tumble. And when the fall does inevitably occur, a child is so little that there’s not so much of a person to break or to hurt. Children are flexible and hardy and quite like a rubber ball. So everyone learnt when they were a wee slip of a thing and now flying is quite like breathing. One takes off with little thought and there they are, back in the sky, on their way to wherever it is they are headed,…

And you are thirty six. And still you cannot fly.

And so you see this flying stuff all the time. It is everywhere, because it is something you do not have the ability to do when everyone else does. Off goes one. And another. No need to concern oneself with traffic, with parking, with being booked…..and everyone says it’s so simple to do. Just like riding a bike.

Which is, of course, exactly what I’m actually referring to. Let’s face it, I’m writing on a cycling blog, after all…..

That was my poor attempt at coercing you into a place where you could try and imagine what it is like to not be able to do something that you actually can and that you take completely for granted in the process. And now I would like to share with you what it feels like to now actually be able to do that something that everyone else does as if they were just taking another breath:

I know it’s taken a while – most remiss of me, I’m sorry – but let me introduce myself:

My name is Caitlin. I’m a Melburnian. I’m 37 years of age. I live bayside and work on the city fringe near Carlton.

And until one year ago I couldn’t fly. I know you all can. But I actually couldn’t. Oh whoops. I meant to say ride a bike. But being one who has just learnt and so does not take this newfound ability for granted, I can tell you very truthfully that flying and bicycling are actually interchangeable words and actions.

At least that’s how it feels to me.  Riding a bike, now that I can, really does feel like flying.

Being 36 and watching what felt like the whole world jumping on their collective bike and soar past me without a care evoked a number of different emotions within. Envy at such a simple freedom, wistfulness, remorse for a nostalgia never attained, frustration at the daily commute in the standstill traffic or the sweaty, smelly locomotive….

And fear: I’m too old. It’s too hard. If I didn’t learn as a child, I never will. Who’s going to help me? How could I do this without being laughed into the ground? And what if I fall off? Like, repeatedly? I felt like the guy in the insurance ad – what if this sign falls on my head? What if I get run over by a Mac truck carrying bulk supplies of bike pumps to Aldi?

But there was another question. What if I just have me a little teaspoon of concrete and give this bike riding malarkey a right royal go?

And so that’s what I did.

And if you keep watching this space, I’ll make it my business to tell you exactly how I went about it.

And I’ll also be sure to remind you how very lucky you are. Because you really are.  Child or no – anyone who has the great tenacity, gumption, bravery and freedom to take in the ability ride is blessed. Anyone who then can jump on a bike and get themselves to where they need to be by the power of their very own sturdy pins without even giving it a moments’ thought, is a fortunate soul indeed.

Because I can fly.

See you here next time. If you’re lucky. Which you are….

To read more of Caitlin’s writing, check out her chapter in The Casual Cyclists Guide to Melbourne.