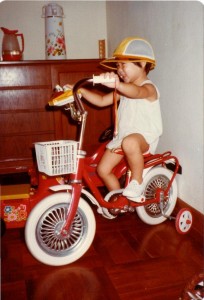 Lots of people, and lots of women especially, tell me that they’d cycle if only they felt safe and confident on the road full of cars.

I always tell them that the only way to become confident on the road is to get on the road.

Leaving aside the bike advocacy issues of helmet wearing, cycling infrastructure and bike safety, I just want to share a little bit of my story of how I became a commuter cyclist.

I was not a very adventurous child and whilst I owned a bike I rode it around the quiet streets of my neighbourhood very gingerly. The week that compulsory helmet laws were introduced in Queensland in 1991, I went to Kmart with my Dad, bought a pink helmet and rode home down a slight incline – losing what little control I had on my bike and taking out a huge chunk of my knee which still bears the scars today.

I didn’t get on a bike for another 15 years.

In the meantime I’d moved to Melbourne to start my first job and discovered the joys of living in the inner city – I didn’t need a car and could get around easily via public transport or by walking. However, the cyclists who zoomed past me every morning on the Yarra path niggled at me. They were getting to places so much faster!

So for my 26th birthday, I asked for a bike and received a lightweight, Diamondback hybrid cobbled together with parts from other bikes. I did a practice run on a quiet Sunday from my house to work and found the speed and sense of freedom exhilarating.

At first I found the traffic scary. However, whenever I felt unsafe or scared, I’d get off my bike and walk. I didn’t know how to cycle off my saddle, so that meant when faced with a hill I’d also have to get off my bike.

I practised letting go of my right handlebar to indicate. I practised letting go of my left handlebar to indicate. To this day, I’m still a bit wobbly on the left side – I have to quickly lift my arm in a jerky motion before I have the chance to topple over. Fortunately, in Australia we drive on the left side of the road so I can get away with minimal left-side hand signals.

The more I cycled, the more confident I became. And when I moved to London with my precious Diamondback, it was the ultimate test. I learnt to be more assertive on my bike, to take up a whole lane if I felt the need, to make eye contact with drivers (and be courteous when they let me in) and to weave around peak-hour traffic. With my bike I arrived to places on time (no tube delays), warm (handy in winter) and with a sense of accomplishment and frankly a bit smug about my eco-friendly fitness workout.

So the moral of this story? The kid who refused to get on a bike for 15 years became the London bike commuter who became the owner of a store selling bike accessories. I’m not the world’s greatest cyclist, I’m not always confident on my bike and I have to hold onto the handlebars – but I’ve never hurt myself on the road and the joy of cycling has taken over my life. Just goes to show that you can too!